What is Vitamin D?

Vitamin D is a steroid vitamin, a group of fat-soluble
pro-hormones best known for their role in supporting
bone health and aiding in the absorption of calcium and
phosphate from the gastrointestinal (GI) tract. It is a key
nutrient for the needs of growing children and adolescents.
A growing body of research highlights its important role
in supporting other body systems, cardiovascular health,
musculoskeletal strength, and immune function. It can
target over 200 different genes throughout the body.
Despite its importance, deficiency and insufficiency of
this important nutrient has reached epidemic proportions
around the world, in both adults and children. Kid-D Liquid
Drops helps growing bodies achieve optimal levels of
vitamin D and supports overall health in children.

Maintaining optimal vitamin D levels in children is a concern for many parents. Known as the sunshine vitamin, one of the key roles of vitamin D is maintaining serum calcium and phosphorous balance, a key aspect of bone health. Our bodies make vitamin D by converting vitamin D2 to D3, or cholecalciferol, when exposed to sunlight; D3 is also the form which the body derives from dietary cholesterol. When calcium and phosphorus levels dip in the body, parathyroid hormone (PTH) is released to increase vitamin D conversion to the active form. D3 is then metabolized to calcitriol, a steroid hormone that helps regulate a variety of genes through the vitamin D receptor (VDR). While vitamin D is available in both forms as supplements, studies have found vitamin D3 is the preferable form as it has been found to maintain active vitamin D levels for a longer period of time. Kid-D Liquid Drops is delivered as D3 (cholecalciferol) for optimal use by the body and provides 400 IU per ½ dropperful, for easy administration and absorption in children. Kid-D Liquid Drops is a convenient way to ensure kids maintain optimal vitamin D status, delivering targeted amounts of vitamin D in an odorless, tasteless liquid that can be added to any beverage.

While it has long been assumed that the majority of the population achieves adequate levels of vitamin D through exposure to the sun, the biosynthesis of the nutrient is affected by time of day, seasons, location, smog/pollution, clothing, and sunscreen. In addition, those with darker skin require more exposure to the sun to attain adequate levels. These factors all contribute to the insufficiency seen in a growing portion of the population. In addition, it takes about 48 hours for vitamin D to be absorbed from the skin into the body and washing skin during that time period can interfere with absorption into the blood. Inadequate intake or levels of cholesterol can also inhibit the adequate production of the nutrient. Depleted levels of vitamin D may interfere with the development of teeth and bones and cell growth, and contribute to poor regulation of immune and nervous systems.

Vitamin D has repeatedly been found in literature to be associated with improved cardiometabolic health among pediatric populations, as well as adults. A systematic review and meta-analysis of the relationship of serum vitamin D and blood fats in a pediatric population found higher vitamin D levels supported a healthier fat profile. A national report from a Middle Eastern population found that lower levels of vitamin D were present even among a population with more frequent sun exposure, and noted the same relationship seen in the meta-analysis.3 A cross-sectional analysis of 3,577 fasting, non-pregnant adolescents also found better cardiometabolic markers among those teens with more optimal vitamin D status.4 Finally, a triple-masked, controlled trial of 50 adolescents supported the favorable effects of vitamin D supplementation on insulin balance and cardiometabolic health.

Numerous studies have highlighted the importance of vitamin D to maintain healthy bone density. In one 2013 study, 52 overweight men and women with suboptimal vitamin D levels were given either 7,000 IU of cholecalciferol daily or a placebo for 26 weeks. The vitamin D group had significantly increased vitamin D levels in the blood and improved biomarkers of bone health.6, 7 A study of vitamin D status, bone mineral content and density (aBMD), and markers of calcium homeostasis in 488 preschool-aged children found higher vitamin D status to be linked to higher BMC and aBMD of the forearm and whole body in preschool-aged children.8 Vitamin D has also been found to be linked to an improvement in bone discomfort and “growing pains” among a cohort of 33 children.

One of the more profound functions of vitamin D is its ability to modulate immunity. An important recent study suggested that improving vitamin D status significantly affects the expression of genetic pathways linked to immune activity. Vitamin D has been shown to boost the immune response by up-regulating specific genes that increase cellular production of natural compounds that protect us against pathogens. A randomized, not blinded, controlled trial of 63 patients, ages 8 to 18 years, with imbalanced gastrointestinal immunity, found better inflammatory markers and cytokines among participants receiving higher vitamin D2.

1/2 dropperful (0.4 mL) per day or as recommended by your health care professional. Can be taken directly on the tongue and swallowed or mixed with the beverage of your choice. Does Not Contain Gluten, corn, yeast, artificial colors and flavors. 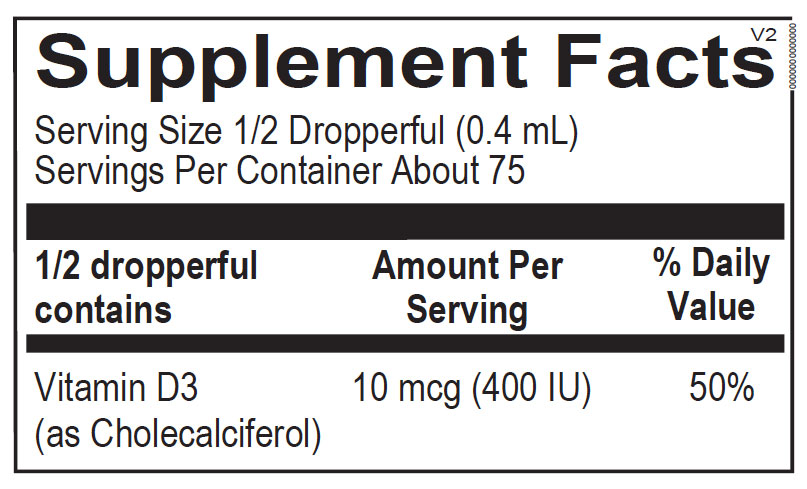